Every now and then, I catch a glimpse of a scene that stops me in my tracks then spurs me to get my gear and capture it!

(The sun sets remarkably fast when you start setting up and snapping.)

Shooting in aperture mode, I set the depth of field to f/22 for the sunbeam effect and got the image below.

Since the wind was brisk, I quickly boosted the ISO from 400 to 1000 to increase the shutter speed from 1/40th of a second to 1/160th of a second and managed to get a crisper shot before the sun vanished behind the low clouds.

Here’s the close up comparison with camera settings from Lightroom .

So glad there was just enough time to make the quick adjustment. I love the final shot.

The next nearest community west of where I live is Dryden with a population of almost 8000. Since my town has about 1200, Dryden offers some stuff Ignace doesn’t. A camera club is one of the activities that draws me there.

Recently I was able to attend a Dryden Camera Club meeting which included a field trip to a local park that has a suspension bridge over the river running through town. A club member referred to it as the ‘bridge to no where’ because you cross over to a platform on the other shore then have to return.

The bridge was of little interest to me to photograph but I did cross it (twice). The moving water was of much more appealing to shoot. There were a few significant challenges, however. The setting sun created harsh contrast even the neutral density filters hardly reduced. Man-made structures up stream and down stream were numerous so we worked at tightening the shot. 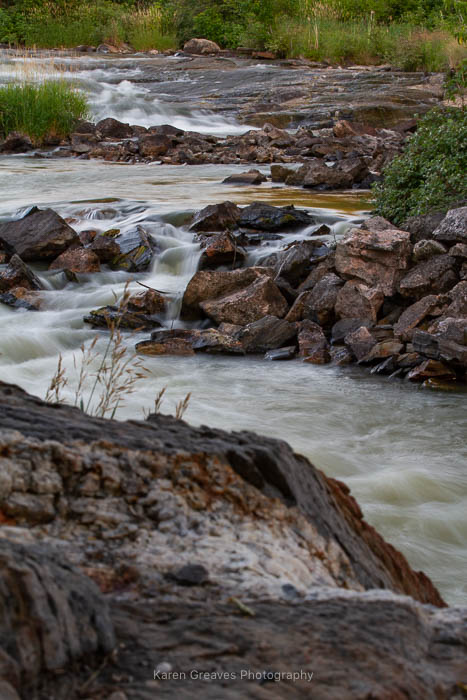 I was pleased with the composition in the above shot (85mm, 1.0 sec, f/20, ISO 100). I really liked how the white in the foreground rock mimicked the layers of white water on the background ridges but disappointed to discover upon upload that the foreground was not in focus. Even though I shot at f/20, I had focused in the middle of the scene instead of the lower third (explained a club member). It would have been easy to take a second image right away with better placed focal point or another with the foreground perfectly clear then blend the images in post processing. Next time.

When I uploaded the images, I had to look very closely to see if what I thought were animal faces were really animals. Do you see any in the upper image? 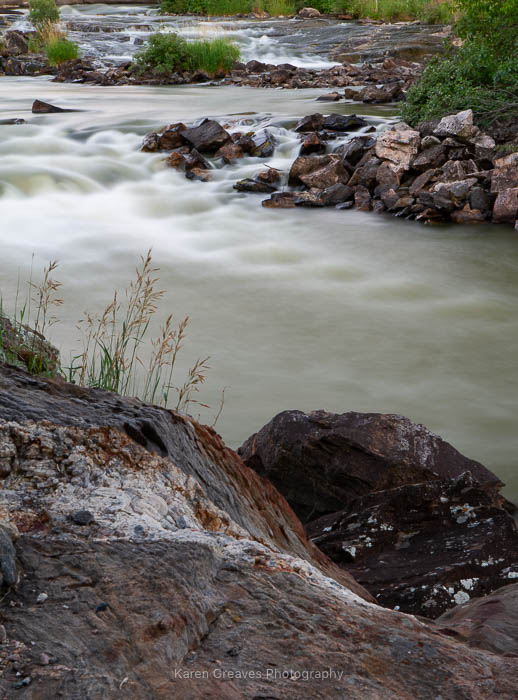 This was taken with my 17-55mm for a wider shot, closer to the edge and better focus. It was about a half hour later and the sun had set. (42mm, 13 sec, f/22, ISO 100) I got the clarity I wanted but the change in lens and angle created a much bigger gap between the rocky layers.

I pulled both images into Photoshop to layer the best of both images but the difference in the smoothness of the water and the focus vs out of focus grasses on the lower left were beyond my current skills (and time required) to tackle.

By the way, here’s where I thought I saw something seeing me…

All my aurora apps were buzzing with notifications of potential aurora activity and the weather apps predicted clear skies, so I convinced my photo buddy, Mel, to join me for a late night stop at Sandbar Provincial Park. When we arrived an the landing, which conveniently extends directly north from the shore of Sandbar Lake, there was a hint of an arch of green glow on the distant horizon.

Eventually, some activity occurred along with additional colour. The purples aren’t visible to the naked eye; prolonged exposure seems to bring that out.

While we waited for something spectacular to happen, we tried our hand with some Milky Way shots form the skies behind us. Note: always take a look behind you every now and then while out on a shoot! I’ll share more about the Milky Way in a later post.

Since not much was changing in the northern skies and the band of Milky Way stars gradually moved behind the tree line, we decided to relocate for a better view of the southern sky.

While doing that the sky behind us brightened significantly (remember to always check behind you!) so we headed back to the landing.

The activity extended from the horizon to directly above our heads. It was difficult to know where to look or point the camera!

This image is a panorama I was able to have Photoshop construct with about a dozen portrait shots of the north sky.

Can you pick out the Big Dipper? 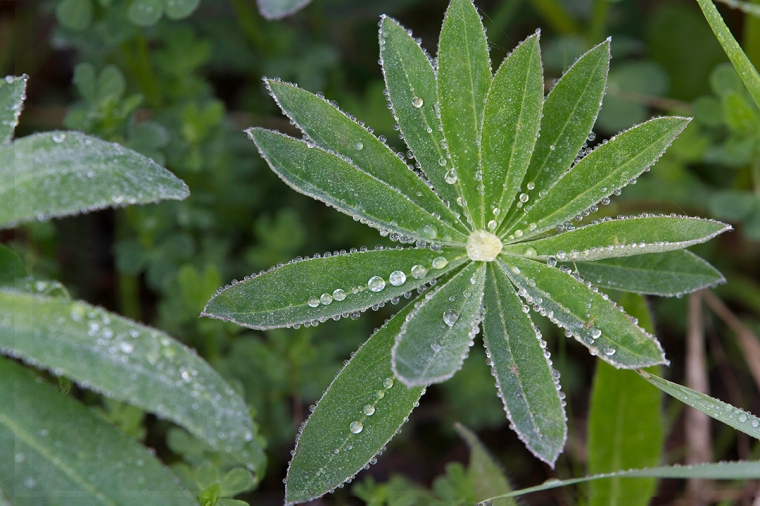 This image was my first attempt at ‘stacking’ shots. With a long lense, it is not possible to get the whole image in focus. I took several shots adjusting the focus each time. The images are stacked in Photoshop and parts of each are masked to reveal the clearest part. A greater amount of the overall image is then in focus.

It is essential to use a tripod. The slightest movement becomes evident in post processing. I tried to reduce movement by shooting with the 2 second self-timer. There was still some movement between shots as the shoot took place in the ditch along side the highway and passing vehicles created an unavoidable draft .

Two of the 4 shots used were overexposed and needed to be adjusted to match the other two. I will have to look into where the exposure lock is on my camera and how to use it!

A couple of thunderstorm systems passed just south of us just after sunset last night. Lightning and thunder played tag in the air. Between 9 pm and 10 pm I shot 87 images in attempt to capture at least one with a streak of lightning

It works through the app on the smart phone. It has lots of great features but I really miss the feel of a button. The ‘trigger’ on the phone is a small dot at the bottom of the screen so it is difficult to find by touch. Perhaps there’s a setting for any part of the screen to set off the shutter – will have to look in to that.

Anyway, there was a lot of lightning but most was sheet lightning.  Even when I thought I was capturing a streak of lightning, the extreme brightness caused the lines blended into the overexposed sky. It was tricky to react like a trained game show contestant with a buzzer and at the same time calculate how long to leave the shutter open relative to how bright the flash of light was! But about the 65th try, I got one!

Got a hot photo tip from a good friend of mine (thanks, Mel!) that at Sandbar Lake Provincial Park the marsh marigolds were out and the bugs were not! So I grabbed my gear and rubber boots to check it out.

I was surprised to see how abundantly they grew in this swampy area just adjacent to the picnic pavilion. The sun was setting and I tried unsuccessfully to catch some of the yellow blooms in the glow of evening sun. The colours were actually captured more truly in the shaded areas. I played around a little with the polarizing filter which helped to reduce some of the glare of the wet forest floor and gloss of the leaves. 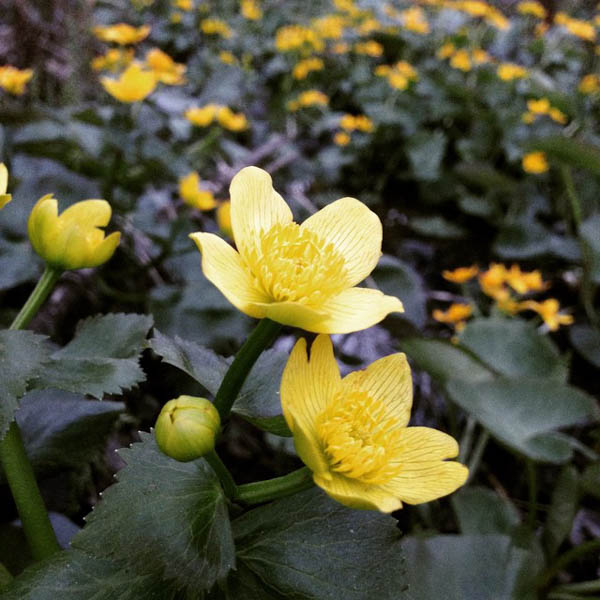 Although I didn’t notice a particular fragrance to the area (apart from damp dirt) there were some distinctive sounds. While I stood to shoot, I could hear the drumming of grouse in courtship nearby. When I decided to move, the earth seemed determined to hold me fast. It took significant effort to release my boots from the suction of the muck.

Sights and sounds of spring!

We live in a beautiful part of Central Canada. I love to watch the effect of the four seasons on my surroundings. Enjoy images of my backyard.